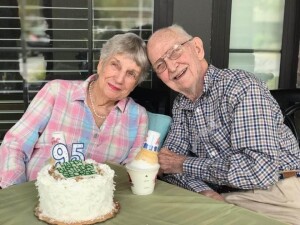 Born in St. Matthews, SC on March 29, 1925, he was a son of late George William, Sr. and Jessie Dodd Stack. He graduated from St. Matthews High School in 1943. George served in the U. S. Navy from 1943 through 1946 in Advanced Base Outfits and later at Okinawa aboard the "USS Curtiss" and the "USS Norton Sound", both Seaplane Tenders. He survived a kamikaze attack in 1945. After the peace treaty was signed with Japan, he served aboard the "USS Curtiss", traveling to Japan and China before returning to the United States.

Three days after discharge from the Navy, George enrolled at the University of South Carolina, graduating with a degree in business in 1950. With his brother, John David, he managed Stack's Grocery in St. Matthews, SC. In 1957, he began work in Charleston with the American Sugar Refining Company.

In 1959, he married Betty Bynum Buyck in St. Matthews, SC at the First Baptist Church. She had been his special girlfriend over the years and the love of his life. They began married life in Greenville, SC and have lived there happily ever since. They joined Buncombe Street United Methodist Church in 1960, where he worked with the children in Elementary II, was a member of The Searchers Sunday School Class, and served on the Older Adult Council.

In 1965, George joined the Britt-Clary Company in Greenville, SC working for them for 25 years. At 65, he retired and opened Primrose Promotions, which was a challenge he enjoyed. As a merchandizer he could incorporate all his ideas and experiences over the years. In addition, he made countless signs and banners for various causes and organizations. George was a director on the board of the South Carolina Food Retailers Association. In addition, he worked with all the food chains and food service people on trade shows in South Carolina and other states.

George had many interests over the years, collecting various items. In addition, he was a wood carver, ceramic maker and an artist. He loved to dance and was member of the Nine O'clock Dance Club, the Merry Mixers Dance Club and the Lamp Lighters. He enjoyed tennis, bridge, the Jumble Puzzle, genealogy, family reunions, and storytelling. George wrote down many of his stories of World War II, family, and friends and enjoyed sending them to others. His special joy was the cultivation of flowers. His yard has always been greatly admired by family, friends, and passersby.

In addition to his parents, he was preceded in death by two sisters, Miriam Stack Riddle and Dorothy Stack Robinson; and one brother, John David Stack.

The funeral will be held on Monday, October 19, 2020 at 1:30 pm at Fred W. Symmes “Pretty Place” Chapel in Cleveland, SC. The family kindly requests that everyone in attendance wear a mask and practice social distancing.

In lieu of flowers, memorials may be made to Greenville Meals on Wheels or the Greenville Humane Society.

Condolences and “Hugs From Home” may be left for the family by visiting www.thomasmcafee.com.