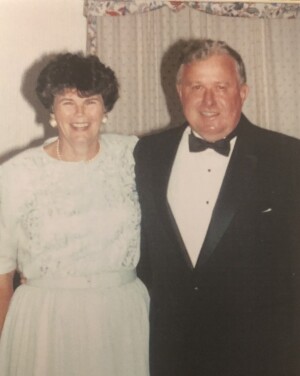 On Saturday, August 1, 2020, the Schichtel family lost their beloved husband, father, and grandfather. Ronald “Ron” Allen Schichtel, age 86, passed away peacefully at his home after a long battle with Parkinson’s disease.

Ron was born on December 14th 1933 in Buffalo N.Y. He was the fourth child of Michael and Marie Schichtel (deceased) and the brother to Barbara Schichtel Taylor and Mary Schichtel McManus. Ron’s love and dedication to his family was evidenced at a very young age as he had his own paper route as an elementary school student in order to help his family provide during the depression era. His hard work ethic and discipline was a common theme throughout his life. He graduated from Canisius College and immediately began a career with Dunlop-Slazenger group that would span 37 years. Ron retired as a Vice President of distribution in 1996. He made many life long friends during his career and considered his colleagues as family.

Ron and his wife Patricia were married after meeting in Crystal Beach Canada. They enjoyed 57 years of marriage and were rarely apart. Pat was his source of strength and most dedicated and devoted caretaker during his final years, never leaving his side. They had two children, Michael Schichtel and Ann Schichtel Wannemacher. He also had three grandchildren, Ryan Schichtel, Avery Wannemacher, and Reece Wannemacher. His family was always the most important and treasured part of his life. Nothing made him happier than being able to share in their successes. He was also the first to offer help and loving guidance when life’s challenges arose.

He loved our family beach trips and hikes in the mountains. He loved to make chili during the colder months and was infamous for it with friends and family. Being of service to others in need was perhaps the thing he loved more than anything else. He was an active volunteer in many organizations such as The Knights of Columbus, The Food Pantry, Saint Vincent De Paul, and often helped at Our Lady of the Rosary and The Poor Clares Monestary. He believed in finding joy in the most simple things and in giving to those in need. He had a special love for animals and the Humane Society was another group he supported. He was a devout Catholic and long time member of Prince of Peace Church.

He was also a member of the US Army and served his country before entering college.

Our deepest thanks go out to Jim McManus, Ron’s nephew. His endless dedication and devotion to Ron’s caregiving needs, especially during the last several years will never be forgotten.

The family would also like to thank the caregivers at Home Instead who did an amazing job of supporting both Ron and Pat with Ron’s needs. Hospice of the Upstate provided excellent care and support when we needed it the most as well.

Lastly, our family would like to thank Ron’s long time best friend, Michael Casazza who spent countless hours in Ron’s last days comforting him with many memories, prayers, and companionship. We are forever grateful that he was able to bring a smile to Ron’s face even on the most challenging days.

A funeral Mass will be celebrated on Saturday, August 8, 2020 at 10:00 a.m. at Prince of Peace Catholic Church, 1209 Brushy Creek Road in Taylors. Burial will be privately held in Nativity Cemetery in Orchard Park, New York.

In lieu of flowers, we would ask that you consider donating to the Poor Clares of Travelers Rest. There will be no reception due to the Covid virus. We hope to plan a celebration of his life sometime in the future.

Condolences and "Hugs from Home" may be left for the family by clicking the link above.